Recently I was on a diving trip to Cebu. Two weeks living on boats and beaches! Sounds great right? Until you measure your numbers and start looking for the quality foods found at home. Not to worry – as with all the locations, every region has it’s local delicacies. And that’s one great thing about the keto diet, it has been around for the ages so “real food” is usually easy to find. And the more remote you go, the better your chances. So we said good bye to the big cities, Starbucks and Maccas and went exploring.

What did we find? Well as it turns out the Cebu famous dish is Letchon Kalawi which is roast pork with crackle. What are the chances! Real food, not processed, not covered in sauces and high in fat. Of course also moderate protein and low carb so that was a great start. It was available most places from street vendor food to restaurants. As per usual the street food was more traditional, tasty and cheap! Like anywhere in Asia it is a night city. Hot meal at midnight – no problems. Breakfast at 8am – that’s tricky. So the Letchon Kalawi double as breakfast if there were no options around. A quick takeaway from the night before with some nuts and coconut oil provided a cold breakfast at the airport, jetty or on the boat. 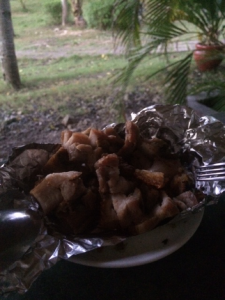 Breakfast was found a few times. The local coffee outlet Bos Coffee served up a decent eggs and bacon. I added half an avocado from my travel pack and we were off and running. The only other surprise along the way was a local Mexican bar that opened for breakfast from 7am (the cook came around 8am). This became a good source of eggs, bacon – and a guacamole salad! Perfect start to the day. 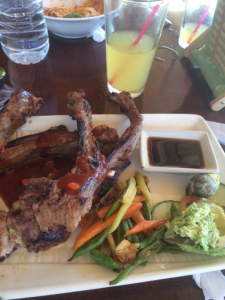 So you’ve found some real food, but how is it served? Covered in sauce? Yup. I always try and ask for no sauce or sauce on the side. Often this is full of MSG or sugars and that will spike your BS Numbers. Likewise with the good old fashion scrambled eggs. A tonne of milk may be added – so fried or boiled could be the way to go.


Of course it wouldn’t be a road trip without snacks! This crispy pork crackle comes in plain or spicy. The plain has nothing added to it. Tastes great and hits your macros. What a great little snack. We found these in some strange spots. They were like the “upsell” when you paid to use a bathroom or truckstop comfort room. But none the less, they were in packets and safe to eat. I haven’t found this stuff anywhere else on my travels yet.

By the end of the trip ketone numbers dropped a little bit. But that may have been due the long days of travels, back to back diving and lack of sleep. Sleeping on the boat for 6 days in a row lead to some disturbed nights but in general my energy was good and I was still firing on all cylinders.